Close Up Interview with Co Founder Rick Chen From Pozible 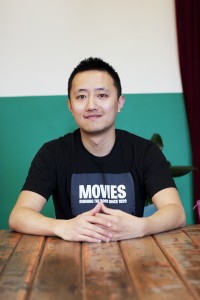 Tell us a little about yourself and your role at Pozible?

I am a young entrepreneur, a new media designer and the co-founder of the crowd funding platform Pozible. I hold a Master of Design in Digital Media from University of Sydney. I’ve gained more than five years experience in digital media design specialising in web and new media. My interests include social media technology, new generation enterprise and online social innovation.

What are the five words that people who know you would use to describe you?

Tell us about Pozible and what you can do to help artists, designers, and the creative community?

Pozible is a new crowdfunding platform and community for creative projects and ideas. Developed for artists, musicians, filmmakers, journalists, designers, entrepreneurs, inventors, event organisers, software developers and anyone with a creative idea to raise funds, engage fans and reward supporters.

What was the purpose for starting a crowd funding business like Pozible, and how has the concept come about?

Last year I had the opportunity to work on a project with a number of visual artists in Australia and learned quite a lot about the creative industry. It became obvious that a large number of artists in Australia were struggling financially. At this time we spotted an art project in Europe that successfully used the power of the crowd to raise capital and get things moving. This lead us to setting up an Australian platform to raise funds for the creative industry. In effect, FundBreak provides the creative industry an alternative funding source and a tool to engage the fans, friends, family and community. Due to the explosive growth of social networking websites like Facebook and Twitter, it has become much easier and convenient for creative individuals, groups and organisations to involve an audience and independently sell or promote projects. 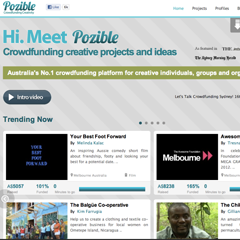 Tell us how Pozible works.

Anyone with a project or idea can post a project on the Pozible platform. The project creator must set a funding goal, a deadline to raise the funds (currently a maximum 50 days) and at leastone reward. A reward is a tangible or intangible perk you offer in return for the support you receive.Support usually comes from your fan base, friends, family, social networks and strangers that simply like your project. If the project reaches (or exceeds) its funding goal before the deadline, all the funds will transferred directly to the project creator. Otherwise, the funds raised are returned to the supporters. This is the all or nothing concept of crowdfunding.

What are the most common issues that you see related to crowd funding?

Since crowdfunding is a relatively new concept, project creators need to understand the keys to success. The act of crowdfunding is an effort and requires commitment and dedication to succeed. Sending an email to your mailing list and hoping that people will flock to fully fund your project on day one very rarely happens. Successful crowdfunded projects will provide project updates, show appreciation, spread the word through the social networking websites, engage supporters and show passion and determination to make the project happen.

What should artists, designers, and the creative community think about when considering crowdfunding?

From start to finish, how long would it generally take to complete a crowd funding campaign?

This varies from project to project. Currently, the maximum number of days a project can run is 50 days. We’ve had project reach its funding goal in 2 days but it really depends on the effort put in.

What advice can you offer to creative businesses who are seeking crowd funding support?

Plan you project well and get input from the people around you. Offer great rewards and be prepared to fully commit yourself to the project. There are heaps of advice and articles available on the subject of crowdfunding – pay ahead to tips from successful projects and sometimes more importantly from people who have been unsuccessful.

Tell us about your process for working with clients?

Do you have a book that you would like to recommend?

This is difficult. I eagerly await a new book to be released this month called “What’s mine is yours – the rise of collaborative consumption“ by Rachel Botsman & Roo Rogers.

Where do we find you and your services?