Drambuie "The Premise" – Pop Up Bar Competition is now on till September 12 2011. 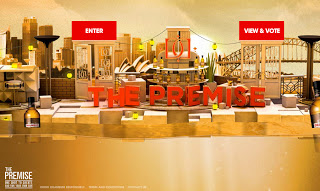 July last year we did a post on the very first Drambuie “The Premise” competition. And guess what the competition is on again this year.A great opportunity for artist,designer and creatively minded, to enter a competition of a life time. Drambuie in creating a awesome competition again.

Here is a basic overall detail of the competition:

You must hurry as the competition will be closed on Monday  the 12 September 2011.

“Want to make sure your idea has legs? Taking your bar from premise to real premises isn’t as difficult as you think. Read on to find out how the competition works.

In order to win The Premise, you’ll first need to become one of ten finalists.

There are two ways to do this. The first and easiest way being by popular vote. Entrants can use friends, family, colleagues and social networking to ensure their uploaded entry gets as many votes as possible. Voting ends on 12 September 2011 midnight, after which, the five highest voted entries will become finalists.

The other way to become a finalist is via the judging panel, who will also pick their top five ‘wildcard’ entries, independent of votes received. The ten finalists will be announced on 16 September 2011, with the secret location for The Premise revealed!

All ten finalists will then be invited to ‘pitch’ their ideas to the judges before a final winner is announced on 23 September 2011.

The winner will then be flown to Sydney on 24 September, to be showered with praise, receive the keys to their very own bar space, and work with the Drambuie production team to bring their idea into reality”

Here is a YouTube video to inspire your creativity!