Tales My Mother Told Me Volume 2- Tale 3: Talking about army on paper. 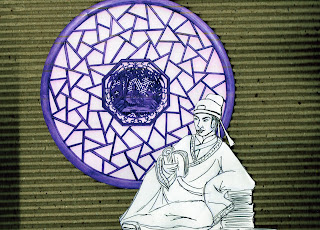 This tale “Talking about army on paper”  is an interesting story. I remember a day, when we had a visitor; my Uncle Chau who came to visit. I had always respected and admired my Uncle Chau. Each time he came to see us I loved to hang around with him and listen to his conversations with Mum and Dad. Uncle Chau would stay with us for hours and talk virtually non stop about everything you could think of. He’s wealth of knowledge was inspiring.
So after his visit on this particular day I said to my Mum “Wow, Uncle Chau is such wise man. He knows everything. He seems to have all the answers.”
Mum just smiled and gave me one of her special looks.
“Well Mum, isn’t he smart?” I asked.
“Yes he is my little one, your Uncle Chau is a typical example of “Talking about army on paper. Your Auntie and our families are all hoping that your Uncle uses his knowledge to do great things  and to apply it to real life. He’s a smart man, but unfortunately he just loves to talk but he’s not prepared to walk the walk.” she said. “Now do you remember the story I told you about the son of General Zhao She?.”
“Of course I remember Mum” I said with enthusiasm.
So here’s a summary of the story; “Talking about army on paper.”
Back in the olden times in China, there was a general named Zhao She who was known for his warfare strategies. He was a hands on type of leader, had fought many victorious battles and gained his knowledge and experience from the battlefield. General Zhao She had a son named Zhao Kuo who looked up to him and wanted to become a well known general just like his father.
As a child Zhao Kuo started to read books about the art of war. When ever he attended functions he loved to recite passages from these books about military strategy and tactics. He also loved to espouse about the process of commanding army troops. He really impressed all his peers with his wealth of knowledge about warfare. He also particularly impressed his own mother who was so proud of him and thought that he would make a great general just like her husband one day.
General Zhou She on the other hand did not think so. He had great concerns about his own son’s arrogance and that he was ‘all talk and no substance’. The General did not think his son would be a good fit as a general. General Zhou She explained to his wife why he thought their son would not be an ideal general and specifically told his wife to make sure Zhao Kuo would not become a general.
To cut a long story short, when General Zhao She passed away the King summoned Zhao Kuo to take his father’s place as a general and ordered him to lead one thousand troops to fight the enemy.
Mrs Zhao begged the King to change his mind and told the King that her son only can talk about the army on paper and had no real life experiences to lead an army. The King was adamant. His decision was made, and Zhoa Kuo had no choice but to accept the role.
General Zhou Kuo marched off to war at the head of his thousand man army. And as his father has anticipated because of Zhou Kuo’s, over confidence, and inexperience as a leader made bad decision after bad decision, all good on paper, but ultimately resulting in an awful defeat, with the needless loss of so many lives, including that of the young General himself.
So what can we learn from this tale, and how can we ensure we don’t follow Zhao Kuo’s path?
Here are some of the points to consider when you’re running your Art & Design practice:

More Tales My Mother Told Me…
Volume 2:
Tale 1: Pulling Up the seedlings to help them grow
Tale 2: Grind an Iron Pestle into a Needle
Tale 3: Talking about army on paper.
Tale 4: Being Persistent
Tale 5: A Poet’s Writing Skills Decline
Volume 1:
Tale 1: “When You Help One, You Help Thousands”
Tale 2: “Your Mind is Powerful”
Tale 3: “The Importance of Self Understanding”
Tale 4: “Being Compassionate”
Tale 5: “Finding the Inner Calmer In You”
Tale 6: “The Magic Pen”
Tale 7: “Here comes the Fair- Weather Friend”
Tale 8: “Confidence & Competence”
Tale 9:“Being Present”
Tale10: “Chicken scratches for what it gets”
Tale 11:“I never see what has been done; I only see what remains to be done”
Tales12: “Frog In The Well”